The Parish Church of St Hilda, Abbess of Hartlepool

Our tour starts at the Norman doorway, now enclosed by the 1932 outer porch. It is pure Norman workmanship, with chevron moulding, and must date from before the rest of the church, which belongs to the Transitional period and was built about 1185 - 1215. 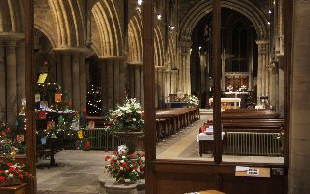 These pictures, taken during annual Christmas Tree Festivals, give a good idea of the splendid architecture which awaits the visitor. The photograph above is taken through the Rood Screen which was moved, in the 2003 re-ordering, from its original position at the Chancel arch to the West end, where it marks the division of the social and worship areas.

Behind the High Altar is the Brus Chapel, containing (perhaps) the tomb of Robert Brus IV. The extreme east end of the church was restored on the original foundations in the 1930s, under the supervision of the well-known architect, Caroe. It had fallen into disrepair in the 17th century and was abandoned. A new east wall was built at that time, approximately where the altar rails now stand.

In the North and South aisles are illuminated panels, some with interactive screens, which tell the story of the Headland. 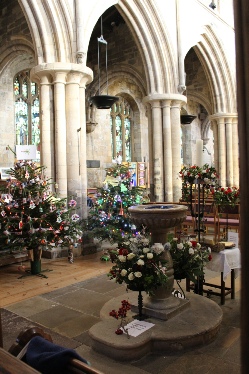